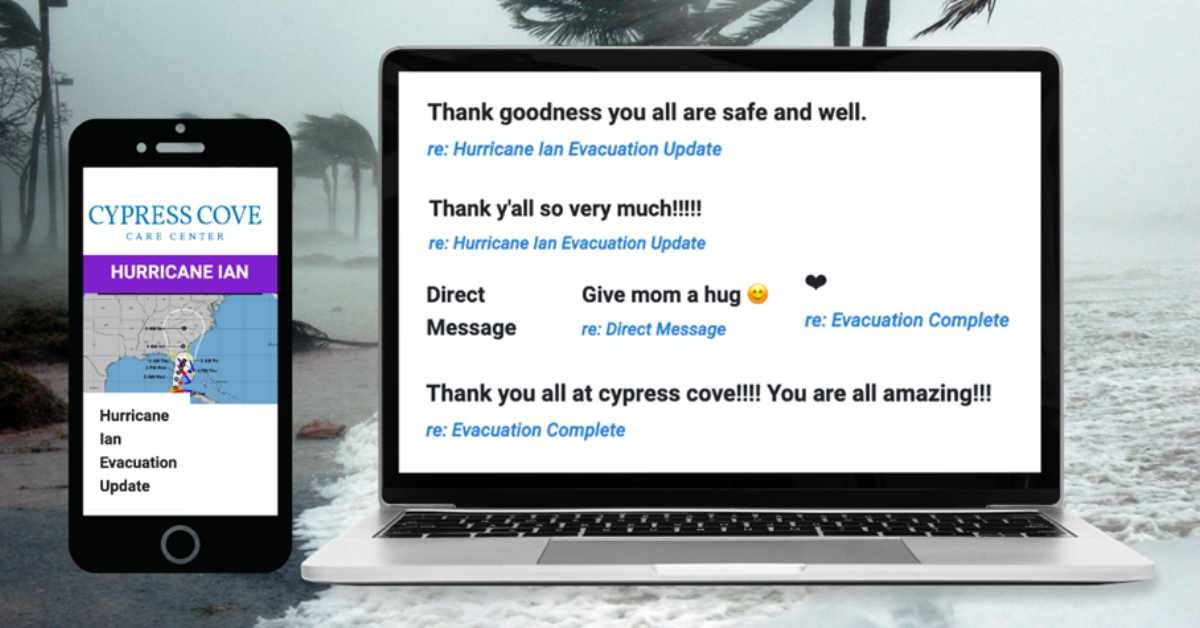 Last month, Hurricane Ian did massive damage to Southwest Florida. Video and images of destruction live on all news organizations are unsettling but impacting. There were stories of flooding, high winds, and emergency notifications on the news.

At Carefeed, we were watching Hurricane Ian from a different vantage point – one of our clients had to evacuate residents from a Crystal River, Florida, senior community and was using Carefeed's tools throughout the process to keep families and staff consistently updated.

Cypress Cove Care Center (a Health Services Management community) has executed an evacuation during Hurricane Season every year for the last four years. They are in the First Zone of flooding threat due to storm surges. The Citrus County Emergency Operations Center has a Comprehensive Emergency Management Plan (CEMP) that Cypress Cove Care Center has in place for resident safety during an emergency. The CEMP is a comprehensive approach to meeting the residents' health and safety needs, and it provides staff with guidance on how to respond to emergencies that could impact the facility's operation.

As we all know, hurricanes' landfall isn't known for its predictability. Michelle Coimbre, Director of Social Services at Cypress Cove, Janet Solis, Director of Nursing, and Administrator Heidi Yerbury, executed a perfect plan from preparation to completion. Cypress Cove's policy during an emergency event, and what is almost always the safest option is to Shelter-In-Place. The facility maintains emergency supplies consisting of food, water, medications, and more. However, by Monday, 9/26, the Cypress Cove experienced team knew an evacuation was imminent and began preparing the 100+ residents for the transfer.

Heidi and Michelle initially contacted their sister facility in Brooksville to make arrangements for Cypress Cove residents and staff. Brooksville Healthcare Center's Administrator Melissa Crookshanks began working with her team to prepare rooms for the residents, including a wing for Covid-positive residents! Brooksville also designated rooms & bathing space for Cypress Cove's entire staff. Administration, Clinical, Dietary, and Laundry remained with their residents during the whole experience, ensuring safety and providing comfort to residents who used wheelchairs or were bedridden and those who were memory and/or dietary deficient. Staff at Cypress Cove also brought their own families to shelter at Brooksville, as they also lived in the evacuation zone.

Cypress Cove began preparing the residents for evacuation on Monday, organizing three days of clothing, medications, medical charts, and more. On Tuesday at lunchtime, the staff began loading three buses (borrowed from sister facilities) with the residents, staff, and their families for the 45-minute drive to Brooksville. "As a newer Administrator at Cypress Cove and having never experienced an evacuation, I was very impressed at how well the staff handled the move. Everyone knew their role and handled it with care and grace," Heidi said. Thankfully, Ian's power did not damage Cypress Cove, so on Thursday, September 29th, residents and staff returned to the community with great success.

Before Carefeed, Michelle and her team had to call every resident's family to communicate the need and protocol for an impending evacuation. They had to verbally connect with each person and then chart the communication in the resident's EHR file. These calls took a full day, in addition to the preparation mentioned above. There was a hotline number that families could call at Brooksville to get updates on their loved ones, and the line was constantly in use. In this last evacuation, the line was less busy. Michelle sent out texts and emails through Carefeed every step of the way; as preparation began, when they started the physical evacuation, when they arrived safely at Brooksville, when they were preparing to leave for home, and finally when they returned home and the evacuation was complete.

In a recent article posted on October 26th in the Citrus County Chronicle, the husband of a Cypress Cove resident, who has dementia and requires a feeding tube for nutrition, wrote a Letter to the Editor giving Cypress Cove "5 stars for successful implementation." He celebrated the efficient and dedicated staff, and "Moreover, of great importance, was communication to families that everyone was settled and doing well including personal feedback about your specific family member." The Carefeed Team was honored to hear from Michelle that "the more updates we gave, the less apprehensive the families were, and staff received fewer phone calls at Brooksville." We applaud Michelle, Heidi, Melissa, and all Cypress Cove and Brooksville staff!

Here is a copy of Citrus County Chronicle's Letter to the Editor written by Ken Everts, whose wife is a Cypress Cove Care Center resident.

Letter to the Editor